Some of you may recall that I was looking for an Octodog machine a while ago, and decided not to bother because they were way too expensive.

Well, I do eat hot dogs occasionally since they're low fat and pretty cheap, and it suddenly occurred to me that it's entirely possible to make something a lot like an octodog with an 8-segment wire cutter gizmo from a mandolin. So this was my lunch a few days ago; The eyes were peppercorns, the blasphemous yellow ichor was mustard... 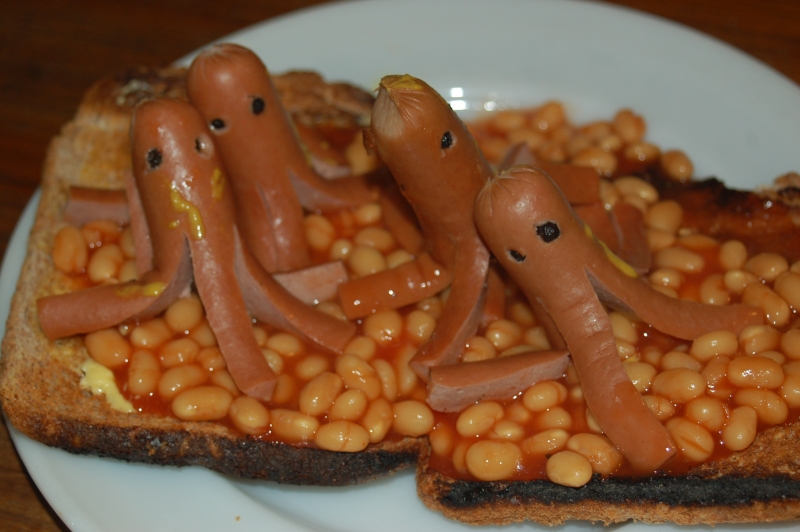 If I do this again I'll probably use something else for the eyes, not quite sure what yet. Possibly capers or cloves? Suggestions gratefully received anyway.

The two-disc DVD set of Prehistoric Park, a predecessor of Primeval, is currently being sold second hand by CEX stores at 50p, and by That's Entertainment on line at £2 including delivery. Or new for £4.82 from Amazon. For those who aren't familiar with the series, it was a "docu-drama" about a zoo set up to rescue extinct animals via time travel, from the makers of Walking With Dinosaurs etc.. Each episode they'd go back in time, rescue one or more extinct animals, and bring them back to the zoo.

There were plot holes you could drive a bus through, such as the reason (never explained) why they could only rescue animals moments before animals went extinct - e.g. a few minutes before the dinosaur-killer hit. Why not five years or five centuries earlier? But apart from that it was a fun show, and I prefer it to Primeval.

Anyway, it's available cheaply and the disks, while PAL, are Region 0 - should be playable on most DVD players (not sure about the USA) and computers. It's worth a look if you're a fan of man-dinosaur interaction.

Note - if you look on Youtube for this series you will find several animated episodes - basically, someone has taken the original programs and made animated videos with the show's soundtrack. But the real show mixed live action and CGI, and is much better.
Collapse